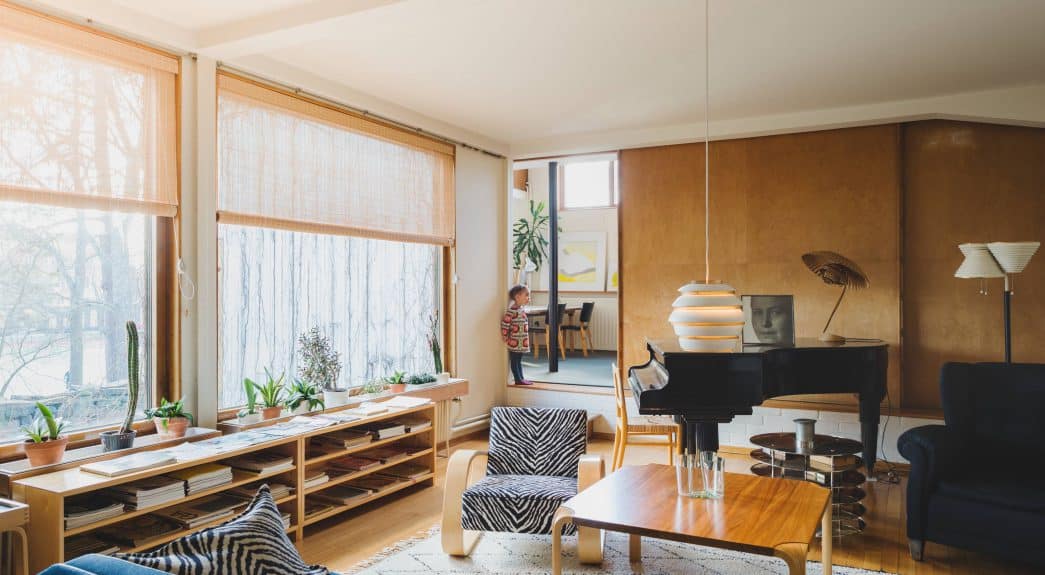 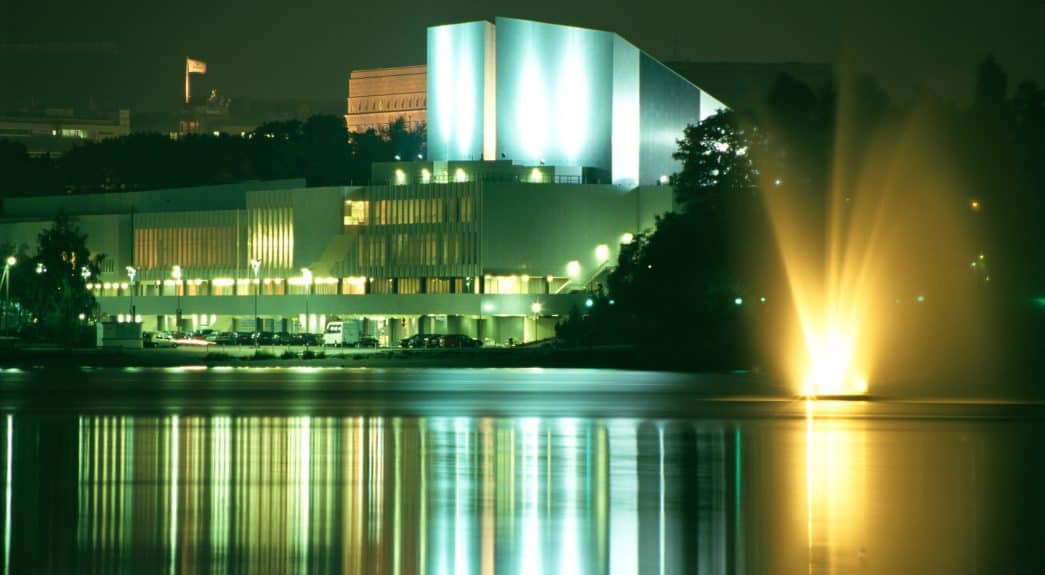 During this new Alvar Aalto tour we visit the following destinations:

Born in the small rural municipality of Kuortane, Alvar Aalto graduated as an architect in 1921 from the Technical University of Helsinki. In 1923, he established his first office in Jyväskylä, carrying the grandiose name “Arkkitehtuuri-ja monumentaalitaiteen toimisto” (Office of Architectural and Monumental Art). The office first moved to Turku and from there ultimately to Helsinki in the early 1930s.

Designed in tandem with his wife Aino Aalto, also an architect, the family’s home was completed in Munkkiniemi in Helsinki in 1936. At that time, the Munkkiniemi area was not yet officially a part of Helsinki. The Aalto house now serving as a home museum was also designed to have a studio wing for use by the architectural office. Aalto knew the area well: as an example, in the early 1930s he designed a residential area (which never materialised) for the M.G. Stenius company in Munkkiniemi. The housing area designed for the employees of the National Pensions Institute were, in turn, completed in Munkkiniemi in 1954.

Several buildings designed by Alvar Aalto have been erected in the Helsinki region over the years. The head office of the National Pensions Institute and Enso-Gutzeit Co. Headquarters with their interiors were designed with great care down to the minutest detail for the needs of demanding clients. The centre of Helsinki houses buildings open to the public, such as the Rautatalo Office Building and the Academic Bookstore as well as Restaurant Savoy, which has kept its original interior from 1937 designed jointly by Aino and Alvar Aalto.

The House of Culture was completed near the centre of Helsinki in 1958. You can get to explore this building with a rich history and still used for versatile concerts and other cultural events during guided tours.

In 1959, the City Executive Board of Helsinki commissioned Alvar Aalto to draw up a plan for the central Kamppi-Töölönlahti area. Aalto outlined a new monumental centre for Helsinki, but ultimately only a small portion of the plans were brought to fruition – the Finlandia Hall is the only building of the row of cultural buildings planned along the Töölönlahti bay that was ever built.

The building completed in 1933 as Paimio Sanatorium was of key importance to the international career of architects Alvar and Aino Aalto. Together with Vyborg (Viipuri) Library, completed two years later, it gave the Aaltos an international profile. Finnish architecture was no longer merely the receiver of influences from outside.

The building, constructed on the basis of their win in an architectural competition resolved in 1929, was groundbreaking. A tuberculosis sanatorium was particularly suitable for a building which followed the tenets of the new Functionalism, where bold concrete structures and state-of-the-art building services were inseparable elements of architecture and practicality.

Aalto designed the interior colour scheme, including the yellow floors in the main staircase, the colourful walls in the corridors, the dark ceilings in the patients’ rooms and the orange balcony rails, in conjunction with the decorative artist Eino Kauria.

The entire building complex, grouped together in several parts according to use, was constructed in accordance with Aalto’s philosophy, right down to the smallest details of the furniture. As far as the loose furniture was concerned, a good many items designed specifically for the sanatorium were used, as well as standard products which were already available. According to the idea of standardisation, which belonged to the spirit of the times, these items were also planned for use elsewhere – for example, many of the light fittings ended up in the catalogue of the Taito metalworks.

The pieces of furniture became key products for Artek, which was founded in 1935. The bent plywood Paimio chair in particular has become an international design icon. On the other hand, the three-legged stool, which is the same age as the sanatorium, was not included in the first phase of the furniture supplied by the Otto Korhonen furniture works. The furniture in the patients’ rooms was dominated by tubular-steel construction, soon to be spurned by the Aaltos.

An operating theatre wing designed by Aalto’s office was added to the main building in the late 1950s and new staff living-quarters were erected nearby in the 1960s. The sinuous, serpentine row of shared flats in the middle of the pine forest, known to the inmates as the ‘Hall of Vipers (Kyykartano), brought a new form of accommodation to the area.

Architect Alvar Aalto lived in Turku 1927 – 1933. This period saw the rise of a new era of architecture and furniture design. Aalto co-operated with Erik Bryggman, one of the earliest representatives of Finnish functionalist architecture, who had founded an office in Turku in early 1920s.

The office for the newspaper Turun Sanomat is an Aalto-designed office building located in city centre, constructed in 1928-29. Turku region is also home to furniture factory Korhonen, the traditional manufacturer of Artek furniture.

The Office Building for Turun Sanomat Newspaper, along with Aalto’s other works, Southwestern Finland Agricultural Cooperative Building and the Standard Apartment House, are included in the listing of Built Cultural Environments of National Importance. The international Docomomo organization also includes these sites in its list of iconic 1920s-1970s Finnish modernist sites.

The Terraced House at the Kauttua Works in Eura is a vivid example of the desire of the architect to integrate the building into the natural environment: the multi-storey residential building adapts to the slope, so the entrance of each apartment is on ground level. Completed in 1938, the Terraced House in Kauttua is one of Alvar Aalto’s most prominent works also internationally. It was an ordered assignment, and intended as the dwelling for the senior clerical employees of Ahlström Osakeyhtiö Corporation. The assignment also stemmed from Alvar Aalto’s friendship with the company’s CEO Harry Gullichsen and his wife Maire Gullichsen.

Located within the Noormarkku Works area, Villa Mairea was built in 1939 to serve as the home of Maire (née Ahlström) and Harry Gullichsen. The progressive couple were patrons of the arts, and they were interested in the clean-cut expression of modernism. Their good friends, the architects Aino and Alvar Aalto, had an opportunity to apply free and experimental design in the planning of Villa Mairea.

These favourable circumstances gave rise to a unique work of art, which is currently considered an international masterpiece in 20th century architecture. Interior design for Villa Mairea was in the hands of Aino Aalto.

The Administrative and Cultural Centre in Seinäjoki emerged from two architectural competitions, and it was built in 1958 to 1988.

Alvar Aalto won a church architecture competition arranged by the Parish of Seinäjoki with his plan “Lakeuksien risti”, Cross of the Plains, in 1951. Seven years later, he won the design competition for the centre of Seinäjoki. Aalto was commissioned to design the town hall, library, theatre and government office building, all of which he had outlined in his competition suggestion.

Aalto’s architectural office designed not only the buildings of the Administrative and Cultural Centre but also the outdoor lighting fixtures, barriers, surface materials for yard areas and plants for the Centre.

Alvar Aalto’s plans for the centre of Seinäjoki were based on monumental but easily approachable squares and other open areas between public buildings. When Aalto was young, he admired the antique cultures, and this is reflected as a forum which was also influenced by the Italian piazzas.

The buildings around the Civic Square in Seinäjoki – the Town hall, Library and Seinäjoki theatre – border the square paved with granite paving and cobblestone. According to Aalto’s suggestion, the square was designed for conferences and summer meetings, and of course as a meeting place of citizens. Alvar Aalto wished that squares intended for the assembly of people would promote a “new renaissance” for the forming and exchange of opinions through social interaction.

The Aalto Centre was built gradually. The last part to be completed was the Civic Square with its fountain and plantings. The paving of the square continues on the eastern side across the street, linking the administrative and cultural buildings to the church buildings. This constitutes an overall work of art of six buildings and the square.

The city of Alajärvi in the Southern Ostrobothnia is located close to Alvar Aalto’s childhood hometown Kuortane. Aalto spent his childhood summers in Alajärvi and later had his own summer house there up to 1940s. For him Alajärvi represented leisure time with family and relatives in contrast to the hectic work at the office with all the assignments and architecture competitions. Later Aalto reminisced the place and called it his spiritual home.

In the scenic Alajärvi one can see buildings from the long span of Aalto’s career, from the earliest assignments to the last of his office. At the Alajärvi Administrative and Cultural Centre there are 11 locations, including the recently renovated Villa Väinölä, a home Aalto designed for his brother.

By the lake in Alajärvi there is the Alajärvi Church (1836), designed by the famous architect C.L. Engel. Aalto
used to have a seat in the church loft in his youth. In the beautiful churchyard you can see e.g. war
memorials designed by Alvar Aalto and the Aalto family grave.

The Administrative and Cultural Centre in Alajärvi consists of two municipal offices, the Parish Centre, Youth Association building, the former Municipal Hospital, a Health Station, Villa Väinölä and the City Library, which was finished by the architect studio of Aalto.

In addition there are the three memorials and the summer house Villa Flora, that Aalto designed for him and his wife Aino Aalto. Today Villa Flora is under private ownership.

The lobby of the Alajärvi town hall houses Muodon Vuoksi, an exhibition of the classic 1930s glass design of Alvar and Aino Aalto.

Alajärvi was a town dear to Aalto and he put his heart and soul into the local projects. The countryside was his retreat during the busy creative years.

The Nelimarkka Museum in Alajärvi was founded by the painter and professor Eero Nelimarkka (1891-1977) in 1964. The building was designed by his friend, the architect Hilding Ekelund. Since 1995 it has functioned as the Regional Art Museum of Southern Ostrobothnia. It focuses on displaying regional Ostrobothnian art but art education also plays an important role.

Temporary exhibitions, workshops and events for visitors of all ages are organized regularly. Since the mid-
1980s the museum has also provided an international residency program for artists.

In summertime you can enjoy coffee and cake in the light atmosphere of Café de Nelimarkka. The museum shop is open year-round. You can book a customized tour or workshop at the museum. Nelimarkka museum maintains the near-by Villa Nelimarkka and Villa Väinölä, located in the centre of Alajärvi.

In Jyväskylä, the city of lakes and hills in the heart of the Finnish Lakeland, you’ll find the largest number of masterful buildings in the whole world designed by the world-famous architect and academician Alvar Aalto.

The impressive portfolio of 28 locations includes, for instance, the Alvar Aalto Museum, Muurame Church and Säynätsalo Town Hall, which is regarded as one of Aalto’s finest works.

Alvar Aalto also went to school, started a family and began his illustrious career in Jyväskylä. The city of Jyväskylä is home to Aalto creations from the very start of his career right through to designs from his final years.

In Jyväskylä you’ll tread in the master’s footsteps from classicism to functionalism and from brickarchitecture to monumentalism!

Tour includes:
– visiting selected buildings designed by Alvar Aalto in each city
– guidance in English by expertised guides in these visiting places
– bus transportation
– hotel accommodation in double rooms (limited number of single rooms available)
– half board
– services of the tour leader

Tour dates:
New tour version coming in September 2021! If you are interested in this tour please send us a message at sales@finlandholidays.fi . We will contact you as the exact dates and preliminary tour program is available.

Tour length:
to be advised

Tour price:
To be advised

Feel free to contact us.
We will answer your request as soon as possible